Part 2 of the draft: Chapter 6 DNS, Certificate and Firewall Requirements for Lync Server 2013

Now that I have outlined the building blocks of a Lync infrastructure, there are three more topics to understand if we want to have a working infrastructure:

A deep dive about firewall rules for Lync Server 2013 should include TechNet article Port Requirements http://technet.microsoft.com/en-us/library/gg398798.aspx and the  Lync 2013 Protocol Workloads poster http://www.microsoft.com/en-us/download/details.aspx?id=39968 (i.e. to check the requirements for the different scenarios). However to make the topic easier to understand, I have tried to create an explanation based on some assumption.

There is no difference in the result, from the functionality point of view, going for the first option or the second one. A single firewall would imply a single point of failure and higher security risk, because a single Internet-connected device will be exposed both on the DMZ and on the internal network. Having two different firewalls, a front (FW2) and a back firewall (FW1), as shown in figure 6.7, is more secure, especially if we are going to use two different platforms or solutions for security. In the aforementioned scenario, an exploitable security vulnerability on a single technology will not affect the second firewall

Figure 6.7 layout including only firewalls and networks that will have an impact on our Lync deployment

We will have to grant the following types of network traffic:

6.5          Network traffic related to Lync clients in the internal network

Note: the point 6.5 of the list is interesting only if you have firewalls (or end-point firewalls) separating the networks containing the Lync clients and the Lync servers.

6.1       Network Traffic from servers in The DMZ to Servers in the Internal Network

On the Back-End firewall, FW1,for traffic starting from the  reverse proxy, the following ports will be required

On the Back-End firewall, FW1, for traffic starting from the Edge Server, the following ports will be required

6.2       Network Traffic from Servers in the DMZ to the External Network

On the Front firewall, FW2, from the Edge Server, the following ports will be required. It is helpful to remind you the fourth assumption: we have three different IPs on the external network interface of the Lync Edge Server: Access, Webconf and AV. The firewall rules for network traffic from the external network to the Edge will have to point to one of the three IPs, as explained in the following table.

6.3       Network Traffic from the External Network to Servers in the DMZ

On the Front firewall, FW2, traffic from the external network to the reverse proxy, the following ports will be required

On the Front-End firewall, FW2, traffic from the external network to the Edge Server, the following ports will be required

On the Back-End firewall, FW1, for traffic starting from the internal network, the following ports will be required

6.5       Network Traffic Related to Lync Clients in the Internal Network

The following rules are required on any end-point firewall and on any internal firewall that controls traffic coming from the Lync clients on the internal network.

Notes Related to the Firewall Rules Required for Lync Server 2013

Lync Server 2013 Edge Server requires DNS resolution and http access to revocation lists of certificates. Depending from your network design, the aforementioned services could be on the Internet or could be available using services on the internal network (like a proxy). The following rule is to be adapted to your network layout

Part 1 of the draft is available here 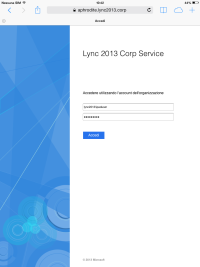 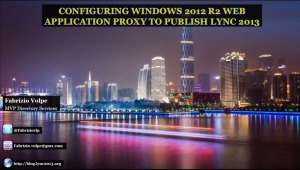 https://www.youtube.com/watch?v=iKpi8UomRDo   Web Application Proxy is a new feature in Windows Server 2012 R2 It is part of the Remote ...

Lync MVPs Around the World – #LyncMVPsMap

A map of Lync MVPs around the world ...