On October 1, 2014 over one thousand people around the world were notified that they have received (or that they have been renewed) the Microsoft MVP Award.

Being and MVP has a huge impact on the life of technical experts, both from a personal and from a professional point of view.

As usual, I have tried to draw a map of Lync MVPs and to get some information from it

The Lync MVP’s community now counts 81 people around the World.

Three former MVPs have lost their award because they are now working in Microsoft. Thank you to them for their effort in the Lync community and good luck in their new work 🙂

The aforementioned situation is the motivation why Turkey is no longer in the map and Belgium and South Korea have one less MVP.

This webcast (in English) is the first part of a series and is taken from a speech I held during ... 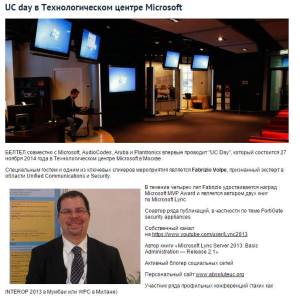 Cloud Security Alliance has organized a beautiful event for Central and Eastern Europe, in Ljubljana. https://csa-cee-summit.eu/ I have received the honor ...