I am a member of the Cloud Security Alliance – Italy Chapter (and I am very proud of it).

CSA gave me the opportunity, in the past months, to take part in the English translation of a document prepared by the ClusIt (Italian information Security Association). The report is called

My thanks go to our president Alberto Manfredi and to the Working Group Coordinator Mauro Gris for the great opportunity.

Introduction to the Report (Quoted from the original text)

In 2012 we gave life to the first “Report on ICT Security in Italy”, then followed by a second edition in June and by the English edition last September. The interest we raised up (more than fifty articles appeared on various newspapers, and over ten thousands requests asking for the report), encouraged us to keep on, to the extent that we made the decision to produce the CLUSIT report yearly and, if possible, with regular updates along the year.

The Report 2013 starts with an overview of the most significant cyber-crime events and IT incidents for the year 2012, and with the trends for the year 2013. It’s a picture extremely up to date and thorough of the global status, posing a particular attention on the Italian status.

We have classified more than 1600 known attacks for 2011 and 2012, sorting them by attackers and victims type, and by attack techniques type.

Talking about Italy, we analyzed the 129 public attacks observed during the 2012, studying their distribution and the type of attacks.

The report also includes the result of surveys involving 207 companies, by which we were able to analyze the ICT security Italian market trend, identifying the areas where investments of public and private sectors are going.

Speaking about job market, our study drew the attention to the most valued professional figures, our goal being to facilitate the students and experts choices.

Furthermore, we gave in-depth analysis on a variety of hot subjects: mobile, social, Cloud security; Health and e-commerce security: two main themes in the Italian Digital Agenda; we then end up with the 2013 Report “Focus On”: the new IPv6 protocol and a series of valuable considerations for a correct back-up and business continuity.

An Old Story We Have to Keep in Mind For a long time, (we could put an ending line around ...

A Year of Lync Videos on YouTube: After Action Report

A Year of Lync Videos on YouTube: After Action Report. Just a year ago I started to create videos on ... 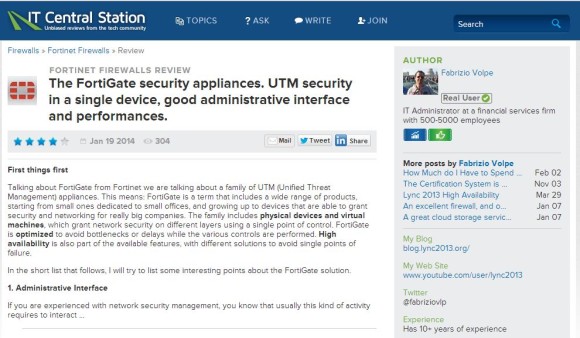 My Review of FortiGate on IT Central Station

My Review of FortiGate on IT Central Station ...